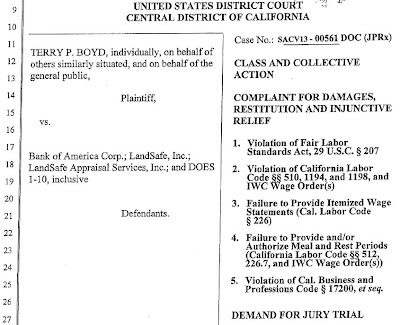 In February, I wrote that overtime lawsuits by appraisers present a genuine risk to many appraisal firms and AMCs.  In that article, I explained some of the special issues relating to whether appraisers properly can be treated as “exempt” employees for purposes of overtime compensation.  The real-world risk to an appraisal firm or AMC is that a staff appraiser will file a legal action alleging that he or she worked more than 40 hours in a workweek, perhaps for a period of years, and will demand the unpaid overtime due plus penalty damages, interest and attorneys’ fees.  For larger firms, there is also the threat of a collective action under the Fair Labor Standards Act (FLSA) — the overtime equivalent of a class action.  Such actions could be filed either by employee-staff appraisers or potentially by appraisers who contend they were misclassified as independent contractors (i.e., “1099” contractors).

It looks now like we are seeing a small wave of overtime litigation in the valuation industry.

On April 9, 2013, a former staff appraiser Terry Boyd filed a collective action overtime lawsuit against LandSafe in federal court in the Central District of California.  According to his complaint, he worked as a residential staff appraiser at LandSafe in Orange County, California from September 2007 until his termination in July 2011.  The putative class members of the lawsuit are all residential staff appraisers who are or were employed by LandSafe or Bank of America within the last three years (or four years in California because of its longer statute of limitations for claims).  The lawsuit alleges a minimum of $5 million at issue and, coincidentally, the case is assigned to Judge David O. Carter, who is also hearing the FDIC’s two lawsuits against the AMCs LSI Apprasial and eAppraiseIt.  This action comes on the heels of three related overtime class actions filed by “valuation managers” and similar personnel against an AMC Integrated Asset Services in Colorado last summer.  Eighteen employees opted into the three actions.  The court approved a settlement on April 2, 2013 for a total of $250,000 to be distributed to the employees after subtracting legal fees.  Overtime litigation often comes in waves within an industry because employees at one business will hear from colleagues who work or have worked at similar businesses involved in overtime litigation.  Those employees will then consider their own situations and consider pursuing claims themselves.

The lawsuit against LandSafe was filed by the same attorney and law firm (Bryan Schwartz Law) who successfully pursued an overtime lawsuit in 2010 by in-house appraisers at JPMorgan Chase and EMC Mortgage. That case settled in May 2012, with Chase paying $1,195,000 to a settlement fund for the 121 appraisers who opted to join the class.