Published by Peter Christensen on February 8, 2013 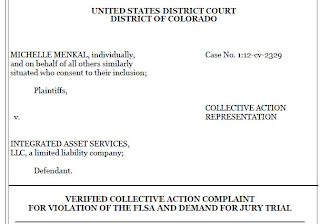 Under the federal Fair Labor Standards Act (FLSA), employees in most types of businesses are required to be paid overtime at 1.5x their hourly rate if they work more than 40 hours in a seven-day workweek, unless they are properly classified as “exempt.”  Recent cases show that this law presents a genuine liability risk to businesses in the valuation industry.

The risk is that an employee who is misclassified as “exempt” and not paid overtime will later file a legal action alleging that he or she worked more than 40 hours in a workweek, perhaps for a period of years and will demand all of the unpaid overtime, penalty damages, interest and attorneys’ fees.  This isn’t just a threat for big firms. Even mom-and-pop appraisal firms employing just one or two appraisers have been dragged into FLSA overtime lawsuits by former employees.  In addition, for larger employers with multiple employees performing the same job functions, there is the threat of a collective action — i.e., the equivalent of a class action by employees under the FLSA.

A Mom-and-Pop Situation.  In one case, Urnikis-Negrov. American Family Property Services, the appraisal firm was owned by a husband and wife — Mr. and Mrs. Lash. The husband was a certified appraiser and also a church pastor. Through their firm, the Lashes employed two of their congregation’s members — who were brother and sister. Ms. Urnikis-Negro — the sister — was employed by the Lashes to handle overall quality control and to review the reports being prepared by Mr. Lash and other appraisers. During her employment, she became a trainee appraiser (the court referred to her as an “associate appraiser). She received an annual salary of $52,000 — more than Mr. Lash paid himself. The trial court described her primary job duties as follows:

Urnikis-Negro’s work in this regard largely consisted of that of a glorified proofreader. Her responsibility in reviewing the appraisal reports was to make sure that all the necessary parts of the report form were filled in, the form did not contain facially apparent errors, and it did not have internal inconsistencies.

Because of the large volume of appraisal work during the height of the real estate bubble, the appraisal firm was quite busy and Ms. Urnikis-Negro frequently worked more than 40 hours per week, but there were no records of the actual time worked. When work slowed in December 2005, the Lashes terminated Ms. Urnikis-Negro. The work slow down probably had something to do the fact that the State of Illinois had suspended Mr. Lash’s appraisal license in May 2005. Ms. Urnikis-Negro, however, landed on her feet and quickly found a new job with a bank. She then sued the Lashes and their appraisal firm for unpaid overtime.

The trial court had no problem concluding that she was not engaged in professional or administrative work based on finding that her work was really glorified proofreading, and the court concluded she was not exempt.  Because there were no actual time records, the court estimated the overtime based on testimony. In the end, the court awarded her $24,866 in unpaid overtime and penalties, plus $95,130.71 in attorneys’ and costs. Ms. Urnikis-Negro actually appealed the damages award contending that her damages were under-calculated and should have been $111,787.50, but she lost that appeal.

A Recent Case Against an AMC.  Let’s turn to a case filed last year against an AMC/lender services company in Colorado named Integrated Asset Services.  Like the Urnikis-Negrocase, this case does not concern true appraisers.  It concerns “appraisal managers” at a large AMC, who were tasked with communicating with appraisers about appraisal orders and performing quality control reviews of the reports submitted.  Keep in mind, of course, that the allegations here come from the plaintiff’s complaint and the allegations very well may not be accurate.  If the allegations are true, however, my personal opinion is that this will be a hard case for the AMC to defend – for the same reasons that the mom-and-pop appraisal firm in Illinois could not defend treating a “glorified proofreader”/trainee as exempt in the Urnikis-Negro case.

This is the plaintiff’s description in her complaint of the alleged job duties of an “appraisal manager” at IAS: 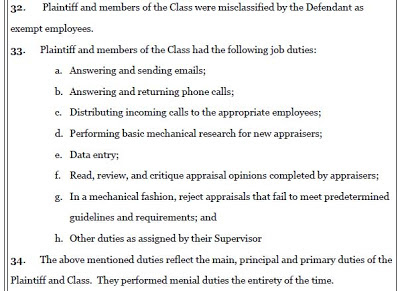 The plaintiff then alleges that she personally worked 50-70 hours per week and was never paid overtime:

We’ll see how the case works out.  It could have significant ramifications for the legal risk faced by other AMCs or firms treating similar valuation-related positions as exempt.  It’s not so much that legal precedent will be established but rather that this case may fuel more litigation about overtime issues in the valuation industry.   In fact, IAS itself is facing two other alleged class actions seeking overtime.  One of the cases is filed on behalf of “valuation managers” who handled BPOs and other agent-performed work.  The last case seeks unpaid overtime on behalf of “reconciliation coordinators” who handled a process for accepting or rejecting valuations used for REO properties or default dispositions.  This particular case was filed by a former employee of IAS who worked for the firm for over 10 years and ultimately held the title “Vice President of Reconciliation and Appraisals” at the time she lost her job in August 2012 — about a month later, she filed the class action complaint for overtime.

I do believe that many appraisal firms and AMCs may be at risk for similar litigation involving overtime issues and that these three cases could lead to future additional litigation against other firms.

The complete complaints in each case are available on www.AppraiserLaw.com at this link.