Published by Peter Christensen on November 25, 2011

In the two weeks leading up to Thanksgiving Day, the FDIC sued 29 individual residential appraisers and a rafter of mortgage brokers in 12 separate lawsuits.  All of the appraisers sued in this round reside in California — in the last three years, the FDIC has so far sued a total of over 150 appraisers and appraisal firms about appraisals in AZ, CA, FL, GA, IL, IN, MD, MI, MN, NV, NY, SC, TX and UT.  In addition, the FDIC has identified approximately 350 additional appraisers as having delivered negligent appraisals to the two AMCs it has sued.

The FDIC’s complaints against the 29 most recent defendant appraisers uniformly allege that the appraisers were professionally negligent by overappraising the value of properties securing loans by failed Downey Savings in 2004-2007.  The average claim against each appraiser is $314,674, which is the amount claimed as damages by the FDIC for unpaid principal, interest, late charges, foreclosure costs and other fees on each nonperforming loan.  The complaints concern both origination and review appraisals and include both supervising and trainee appraisers as defendants.

All of the defendant appraisers had applied for and been accepted by Downey Savings for its approved appraiser panel, according to the FDIC’s complaints:

The FDIC has not sued any former appraisal officers or managers of Downey Savings.  The FDIC has sued officers of other failed lenders for negligently managing the appraisal process, but it has not yet sued any chief appraisers.

Some of the allegations of negligence against the defendant appraisers suggest that the FDIC is seeking to hold appraisers liable for things most appraisers would not normally expect — such as failing to provide analysis of whether the appreciation of a comparable sale “was sustainable or the product of real estate speculation.”  Here, for example, are the FDIC’s claims about how one appraiser was allegedly negligent in connection with an appraisal delivered at the height of the California real estate market in 2006: 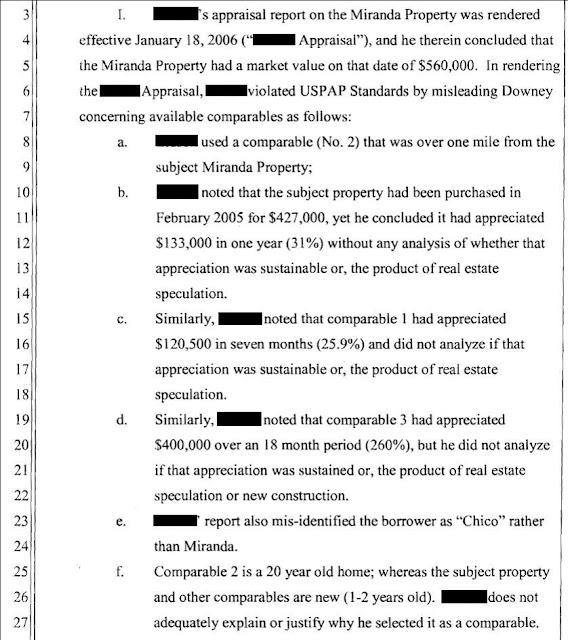 Based on those allegations, the FDIC seeks $254,000 against the appraiser.  In the allegations below from a different complaint, the FDIC is blaming the appraiser for failing to indicate that “the market was possibly slowing” at a certain price level in 2005 based on one of the selected comparables having been on the market for 91 days:

In another allegation, the FDIC is alleging that an appraiser was negligent because three comparables “were over one mile” from the subject property and one comparable sale was more than six months old:

The full stories behind the failed loans and the FDIC’s lawsuits against the appraisers are more about a lender’s — Downey Savings’ — willingness to buy loans from mortgage brokers without any checking or quality control of the accuracy of information submitted by the broker with regard to borrower financial qualifications.  Every loan at issue was plagued by lies or fraud with respect to the borrower’s income or assets — and as a result, the borrowers simply could not afford the loans funded by Downey Savings.  Yet, at the end of the day, the appraisers are being to looked to as guarantors for the entire unpaid loan balances, unpaid interest, and foreclosure costs.  This is usually a shock to most appraisers — and the appraisal profession certainly does not factor the cost of this risk into the price of appraisals.
Below is the story — as told by the FDIC in its own complaint — regarding one loan that resulted in the FDIC suing the appraiser for the unpaid loan balance and foreclosure costs after foreclosure.  These allegations are from the FDIC’s smallest claim against the 29 appraisers sued in the last two weeks.  The FDIC’s claims range from $103,165 to $994,517, in the case of the appraiser sued twice.  The Plaintiff referred to in the allegations here is the FDIC as receiver for Downey Savings. 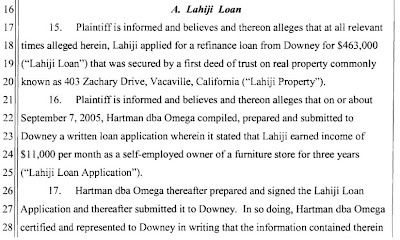 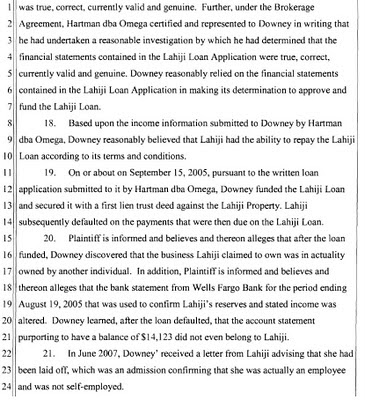