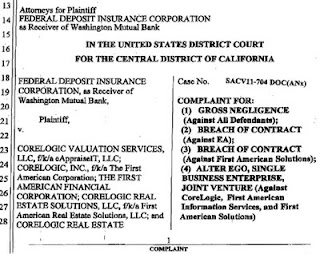 In December, we offered 11 predictions for AMC liability risks in 2011.  Three of the predictions were: #1 — several AMCs would be sued by the FDIC, #5 — some AMCs would see their “reps and warrants” come back to bite them, and #11 — the FDIC would continue to be the single biggest source of appraisal-related claims.  See 11 Predictions for AMC Liability Risks in 2011.  These came true in the last two weeks.

The lawsuits described below against CoreLogic and LSI Appraisal will likely also lead #3 to occur: a few AMCs will endure liability aftershocks relating to litigation by the purchasers of mortgage backed securities.  Purchasers of WaMu packaged mortgage securities — and likely MBS from other sources — will almost certainly pursue their own claims against these AMCs.  We may also see consumer class actions attempting to emulate the FDIC actions.

The FDIC’s Lawsuit against CoreLogic and eAppraiseIT

On May 9, 2011, the FDIC filed a lawsuit in U.S. District Court (C.D. Cal.) against CoreLogic and various affiliated companies including  CoreLogic Valuation Services, LLC, f/k/a eAppraiseIT, LLC (” eAppraiseIT”).  In its complaint, the FDIC alleges that eAppraiseIT supplied potentially thousands of improper appraisals and that eAppraiseIT was grossly negligent in the provision of appraisal services in 2006 and 2007.  According to the 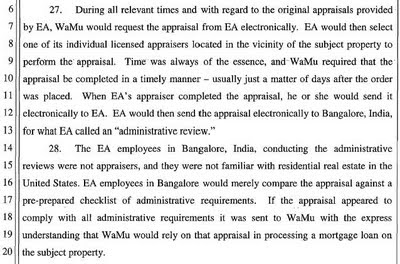 complaint, the FDIC has sampled 259 appraisals out of the thousands at issue and alleges that 194 (or 75%) of them “contain multiple egregious violations of USPAP.”  Keep in mind that many so-called “forensic 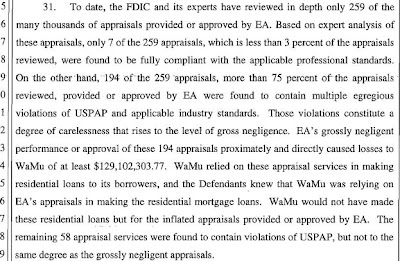 reviews” obtained by entities making appraisal liability claims, including the FDIC, are often pieces of advocacy, riddled with their own problems and supplied by other AMCs. Nevertheless, just based on those 194 allegedly flawed appraisals, the FDIC says that eAppraiseIT is responsible for more than $129 million in losses that WaMu allegedly suffered — presumably, the damages sought by the FDIC could be much higher when the FDIC reviews more appraisals.  A few sample allegations from the FDIC’s complaint are attached to the right.

The FDIC’s allegations appear closely related to the issues in the 2007 case filed in New York state court by then-NY Attorney General Cuomo against eAppraiseIT.  That case is still being litigated — most recently, the New York court denied a motion for summary judgment by eAppraiseIT as discussed in this prior post here. 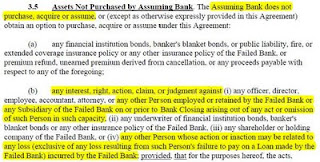 How is it that the FDIC can be suing about appraisals delivered 5 or more years ago?  First, when the FDIC sells off the assets of a failed lender for which it has been appointed receiver, the FDIC typically retains for itself the right to claims against parties like professionals and officers and directors whom it can blame for losses of the failed lender.  The standard language included in FDIC asset sale agreements is shown to the right.   Second, under its interpretation of the Federal Deposit Insurance Act, the FDIC receives an extension of any state statutes of limitations — an additional three years for tort claims (e.g., negligence) and six years for breach of contract claims, running from the date of the FDIC’s appointment as receiver.

The FDIC’s Lawsuit against LSI Appraisal and Lender Processing Services

The FDIC also sued LSI Appraisal, its parent corporation Lender Processing Services and various of their affiliates yesterday in the same U.S. District Court.  This lawsuit also concerns appraisals delivered to or managed for WaMu during the same period.  In this lawsuit, the FDIC seeks approximately $154 million in damages, but these alleged damages only relate to 220 specific appraisals or review appraisals supplied by LSI between June 2006 and May 2008  — the FDIC says it has only sampled 292 so far (of course, the ones sampled would only be for loans that have defaulted).  The FDIC suggests in its complaint that there could be thousands more appraisals at issue.  Indeed, the FDIC alleges that LSI supplied or managed more than 386,000 appraisals for WaMu during the relevant time period.

A sample of the FDIC’s allegations in the complaint against LSI Appraisals is attached above.  The full text of the complaint is available here on appraiserlaw.com.

In our prior predictions for AMC liability risks, we also advised that the representations and warranties so freely made by AMCs to secure lender business would also present a problem in 2011.  These “reps and warrants” and the related indemnification clauses will make the FDIC’s case against both AMCs much easier to pursue.  A sample of the indemnification given by LSI, as alleged by the FDIC in its complaint, is included here.  Appraisers and AMCs alike need to pay attention to what they are signing away.

The FDIC undoubtedly continues to be the biggest source of appraisal-related liability claims.  In addition to the two cases above, in another lawsuit filed April 29, 2011 in the same federal court, the FDIC sued insurer General Star National Insurance Company for denying coverage for a claim made by the FDIC against an appraiser insured by the carrier.  In that complaint, the FDIC seeks approximately $525,000 in compensatory damages against the insurance company and an unspecified amount of punitive damages. The FDIC earlier obtained a default judgment for $459,000 against the appraiser in a separate lawsuit.  After reading the court documents in both cases, I believe that the insurance carrier’s denial of the claim was likely appropriate under the policy it issued and that the case typifies FDIC bully tactics.   In state insurance filings, GenStar has now indicated that future E&O policies effective after 6/1/2011 for appraisers needing insurance for work before August 2008 will contain an exclusion for damages alleged by the FDIC.  Most insurers are making this move because of the FDIC’s hyper-aggressive litigation tactics against individual appraisers — insurance premiums that most appraisers can afford are just not enough to cover the FDIC’s view that appraisals are a form of mortgage insurance.  The case is a good lesson for appraisers, and AMCs too, about the critical importance of coverage for “prior acts” since the reason for the claim not being covered was that the appraiser did not have coverage for her prior acts.

The FDIC also filed another lawsuit against an individual appraiser in the same Santa Ana federal courthouse on May 2, 2011 — showing that while the FDIC has moved up the chain-of-command in the appraisal industry by suing two of the largest AMCs and insurance carriers, it will continue to sue the little guy as well.

General Remarks about Claims against AMCs and Appraisers

As noted elsewhere on this blog, while we report on lawsuits affecting appraisers and AMCs, I don’t think that anyone in the appraisal industry should relish in the liability of other parties, even large AMCs.  This litigation will likely hurt all appraisers.  The lawsuit may unfortunately further diminish the perceived value of appraiser-performed valuations in general and subject unrelated appraisers to even more litigation by other parties (even if the appraisers had nothing to do with these AMCs).  In addition, no one — whether it’s a full-fee independent appraiser, an AMC panel appraiser or an AMC itself — is paid an appraisal fee high enough to justify the treatment of any opinion of value as a guarantee of value or as alternative mortgage insurance.  The quality standards during the mortgage boom years were set by the lenders and their regulators — lenders got the quality they ordered under the supervision of their regulators, including the OTS and FDIC.  Yet, now, these same lenders and the FDIC are looking at those appraisals as a way to recoup their losses resulting from bad lending and falling real estate prices.