Evaluation Solutions: The Anatomy of an AMC’s Failure and Why Lenders Should Care

Published by Peter Christensen on January 29, 2013 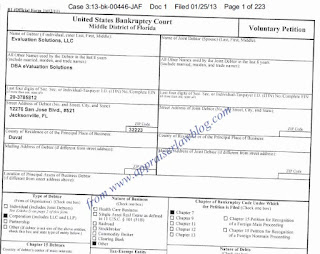 Last week, I had the opportunity to speak together with Tony Pistilli to the Collateral Risk Network about the subject of lender oversight of appraisal management companies.  With that exciting topic as the theme, I focused on the specific issue of AMCs failing to pay independent contractor appraisers (and also failing to pay agents/brokers) and why that should concern lenders in terms of regulatory and liability risk.  Of course, the issue already is a concern for many appraisers and their bank accounts because of the recent failure of not only Evaluation Solutions but also National Real Estate Information Services (NREIS).

The failure of Evaluation Solutions and its subsidiary ES Appraisal Services (I refer below to both companies as “ES”), in particular, provides a good look at the anatomy of an AMC’s downfall and bankruptcy.  ES filed its Chapter 7 Bankruptcy Petition on January 25, 2013 in Florida.  The AMC had signaled that it would file for bankruptcy in December, when it was widely reported to have lost its biggest client JPMorgan Chase Bank.

Here are some of the interesting points I gleaned from reading ES’ 231-page bankruptcy petition and its subsidiary’s 87-page petition: 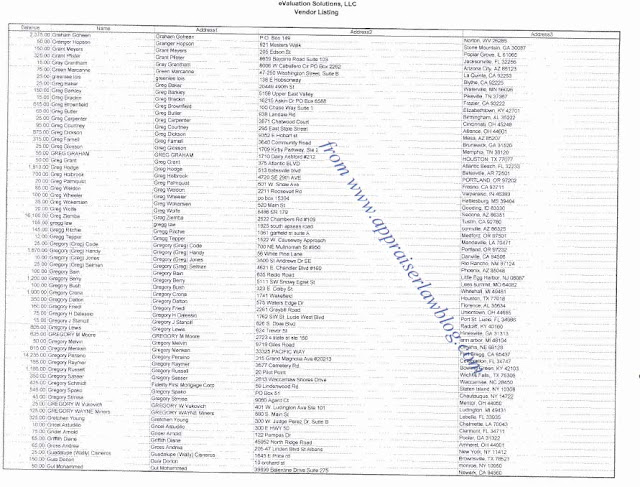 That brings me to the main point of my presentation to Joan Trice’s CRN group. Why should a lender care about appraisers not being paid by an AMC?  There is an obvious moral reason — the managers and owners of any business should care that the vendors of services to that business are paid for the services they provide.  Leaving that big reason aside, I explained to the group that there are practical reasons why lenders should care and pay more attention to whether the AMCs they use are actually paying their panel appraisers on a timely basis — namely, lenders should care because the potential consequences to them from AMC non-payment include:

And, I did bring up the specter that under Dodd-Frank, it is the lenders’ duty to “compensate fee appraisers at a rate that is customary and reasonable” and that a regulator or attorney general might well agree that zero compensation received by the appraiser cannot be justified under either presumption under Dodd-Frank rules for establishing customary and reasonable fees.

A few lenders are starting to get smarter about the risk of AMCs failing to pay appraisers.  I am seeing this firsthand in some of the service agreements I review between lenders and AMCs.  I have started seeing contractual provisions implementing periodic reporting by the AMC to the lender of the payment status to independent contractor appraisers.  I am also seeing provisions by which the lender requires payment to appraisers within a certain number of days of the lender’s payment to the AMC and, in one case, a requirement for a segregated payment account.

Copies of the full bankruptcy petitions are here.