Published by Peter Christensen on March 8, 2011 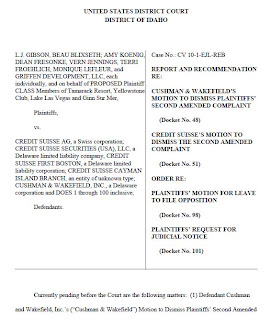 This post was updated on April 13, 2011 to reflect a subsequent order by Judge Lodge accepting and rejecting certain of the magistrate judge’s recommendations.  See note at the bottom for the update.

When I first saw the complaint filed by the plaintiffs in this lawsuit in federal court in Idaho about a year ago, I thought it was most remarkable for its conspiracy theories and the amount of alleged damages — $24 billion. The complaint is a diatribe against bankers at Credit Suisse and appraisers at Cushman & Wakefield, who are alleged to have conspired to create what the plaintiffs call a “Loan to Own” scheme under which Credit Suisse, aided by inflated appraisals, purposely lent hundreds of millions to the developers of four extravagant resort communities as part of an evil plan that the developers would default and that Credit Suisse would then foreclose and obtain ownership of the resorts at below market value.  The plaintiffs in this lawsuit, however, are not the broke developers as we would usually suspect — and they are not the appraisers’ clients or anyone that the appraisers might have imagined as being intended users of their appraisal reports.  The plaintiffs are wealthy individuals who purchased homes or lots in the resorts that were master-planned by the developers to whom Credit Suisse lent development funds.

The lawsuit was filed as a class action against Credit Suisse and Cushman & Wakefield on behalf of 3,000 or so owners at four luxury developments — the Tamarack Resort in Idaho, the Yellowstone Club in Montana, the Lake Las Vegas development in Nevada, and the Ginn Sur Mer Resort in the Bahamas.  The appraisers at Cushman & Wakefield prepared appraisals for the development loans extended by Credit Suisse to the developers of each resort.  These development entities later defaulted on the loans and wound up in bankruptcy.  This had the result of stopping or delaying the completion of the resort amenities that the wealthy property owners expected in each location (e.g., the Yellowstone Club features its own ski area available to resort members).  Meanwhile, the value of the luxury properties and real estate in general plummeted — everyone else seems to realize this decline except for the owners in their resort hideaways.  The property owners blame their financial and emotional losses on a scheme by Credit Suisse to saddle the developers with too much debt based on the inflated appraisals from Cushman & Wakefield — for the grand purpose of causing the developments to fail so that the bankers could later pounce on ownership of the resorts (while enriching the bankers with lavish compensation along the way).

The four appraisals from Cushman & Wakefield have not been made public in this case, but the pleadings disclose the following:

Last year, Cushman & Wakefield filed a motion to dismiss the plaintiffs’ complaint.  Despite the billions of dollars at stake, the legal points and authorities asserted by Cushman’s defense team were really no more complex than those argued in any appraiser liability case. Cushman’s arguments came down to simple points like — paraphrasing — “lack of a duty owed by the appraisers to the plaintiffs,” “no justifiable reliance” and lack of “privity.”  Cushman’s appraisers, however, recently learned that these traditional notions usually do not save the day in a motion to dismiss the appraiser liability claims of far-removed third parties such as the property purchasers in the resorts.  Appraisers do not realize how concepts like “client,” “intended use” and “intended user” have eroded until they reach the courtroom as defendants and only then do they discover that their profession has lost control over these concepts.  At this point, the appraiser defendants also learn that their colleagues, or competition, are ready and willing to testify against them and advocate for their liability to parties whom the appraisers never imagined as intended users and for purposes for which they did not produce their reports.

In late February of this year, the federal magistrate judge hearing Cushman’s motion recommended in an advisory opinion (a district court judge may review and either accept or reject a magistrate judge’s advisory recommendations) that plaintiffs’ negligence claim could go forward against Cushman & Wakefield and that a number of their other claims could be amended to add additional facts.  The magistrate judge did recommend that a few of the most outlandish claims — such as that the appraisers participated in a Racketeer Influenced Corrupt Organization (RICO) be dismissed.  This was Magistrate Judge Bush’s reasoning with respect to the negligence claim against Cushman:

The gravamen of Plaintiffs’ negligence claim is that the Loan to Own scheme, premised upon misleading appraisals, initially justified massive loans, but, later, so burdened the developer’s borrowers, that the resorts’ occupants were left with unfinished amenities once those developers defaulted on their loans – allegedly, all by design. According to Plaintiffs, Credit Suisse’s and Cushman & Wakefield’s participation in the Loan to Own scheme violated customary real estate valuation practices to Plaintiffs’ ultimate detriment, thus representing the duty, breach, and causation elements of a negligence claim. The Court is satisfied, at this time, that such allegations represent a claim that, while likely to be further tested on summary judgment, should not be dismissed before the allegations are even tested further.

Cushman & Wakefield is taking the case in Idaho seriously.  It has thrown a large legal team at the dispute.  A commercial appraisal firm has to be concerned when it is heading toward trial with a gaggle of Swiss bankers as co-defendants in an Idaho courtroom with billions in alleged damages at stake.

Update: This post was first made on March 8, 2011.  After that date, on March 31, 2011, District Court Judge Lodge entered an order accepting the bulk of the magistrate judge’s advisory opinion, except that Judge Lodge rejected the recommendation on the negligence claim against Cushman & Wakefield.  Judge Lodge’s ruling is here.  As a result of this order, all of plaintiffs’ claims against Cushman were dismissed, but plaintiffs were granted permission to file an amended complaint with new or additional allegations to support their claims for fraud, negligent misrepresentation, tortious interference, negligence and conspiracy.  Plaintiffs have until April 21, 2011 to file that amended complaint.  For the moment, this means that things are looking a bit better for the appraisers.