Published by Peter Christensen on January 19, 2011 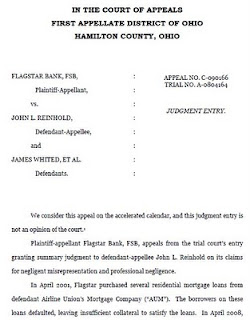 The case is entitled Flagstar Bank, FSB v. Airline Union’s Mortgage Company.  The appraiser in the case is now retired.  Flagstar’s lawsuit concerns three appraisals performed by this appraiser, who was not insured by LIA, in 2001 and 2002 for three different loans by Airline Union’s Mortgage.  Flagstar then purchased the loans from the mortgage company.  It resold two of the loans to secondary investors but the borrowers soon defaulted.  The secondary investors suffered losses when they foreclosed on the properties in 2003 and 2005, and held Flagstar responsible for the deficiencies.   Flagstar held onto the third loan, but the home securing it burned down in 2003 without sufficient insurance coverage, and Flagstar was left with a loss on this loan too.  Flagstar blamed the appraiser for all of these losses along with eight other defendants, including the original lender.  Flagstar’s lawyers, however, did not file its lawsuit until 2008 — seven years after the first appraisal.  Flagstar’s lawyers do not explain why they waited as the clock ticked during those years.

The defendant appraiser filed a motion for summary judgment on the basis that Flagstar’s lawsuit against him was filed too late and barred by the Ohio statute of limitations applicable to professional negligence and negligent misrepresentation claims.  The limitations period in Ohio for these claims is four years — and, unlike the law in many states, the more accepted law in Ohio is that the four-year period begins to run on the date of the appraisal (i.e., when the negligence allegedly occurred), and not from when the alleged negligence or harm was discovered.  Based on the weight of Ohio legal precedent and on the plain wording of Ohio’s statutory law, the trial court entered judgment against Flagstar and dismissed its complaint against the appraiser.  Flagstar appealed to an Ohio court of appeal but the appellate court quickly affirmed the trial court’s decision (the court of appeal’s decision can be found here).

Deciding to focus its claims on just the appraiser, Flagstar dismissed all of its claims against the other eight defendants in the lawsuit.  It is now trying to overturn the trial court and appellate court decisions and the established legal precedent favorable to appraisers in Ohio.  Flagstar’s argument to the Ohio Supreme Court is essentially that the statute of limitations period for claims against appraisers in Ohio should not begin to run until someone like Flagstar discovers the full extent of the alleged damage it has allegedly incurred as the result of negligence in an appraisal.

Who supports the lender’s position on the statute of limitations?  The answer is the Ohio Association for Justice — formerly known as the Trial Lawyers of Ohio — in other words, contingency fee lawyers and other lawyers who want to have an easier time in court suing professionals like appraisers, bankers and brokers.  This group of lawyers has filed an amicus brief supporting lender’s appeal.

Who supports the appraiser’s position?  The Ohio Association of Realtors and its 29,000 members — they’ve filed a brief supporting the appraiser’s position and the stability of having a clear, easily determined four-year statute of limitations period apply to professional liability claims like these.  (The OH statute of limitations law at issue in Flagstar’s appeal applies to many kinds of claims and not just claims against appraisers.)

The remarkable thing is that Flagstar’s lawsuit against the appraiser in this case is not the only lawsuit that the lender has lost against an appraiser in Ohio based on the statute of limitations.  In another case that Flagstar also has appealed to the Ohio Supreme Court, the appraiser performed an appraisal in March 2001 and a foreclosure of the property took place in July 2004 — but Flagstar waited for three more years after that to file its lawsuit against the appraiser in November 2007.  At that point, it was over six years from the date of the appraisal; thus, the trial court dismissed Flagstar’s lawsuit as untimely under Ohio’s law.  A different Ohio court of appeal upheld that result — and Flagstar is likewise appealing that appellate decision to the Ohio Supreme Court.  The two appeals have been consolidated for consideration.

(All of the briefs filed by the parties are available here.)

Allegedly “Loose Lips” Cause a Big Claim. A recent and relatively big appraiser liability claim involved a commercial appraiser’s alleged breach of confidentiality.  The damages paid to the plaintiff were significant.  According to the plaintiff’s complaint Read more…

Update: Heritage Pacific Financial filed for bankruptcy in January 2014.  For information about a new litigation venture against appraisers by some of its former management, please see this newer post here.These are four of the Read more…