Warning for Appraisers about CoStar Copyrights and Licenses 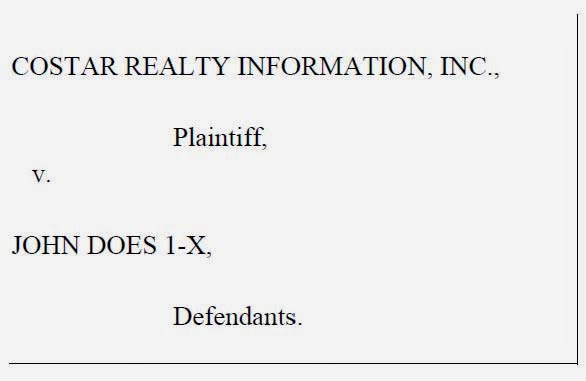 In the last week, CoStar Realty Information has filed several lawsuits against commercial appraisers and real estate brokers for intentional copyright violations and fraud relating to the alleged use of CoStar property data and photos without proper registration/payment.

If you use CoStar, be sure you are doing so properly and within the terms of your license agreement. Examples of the types of alleged situations that have led to CoStar’s recent and past copyright lawsuits are:  (1) sharing IDs/passwords, (2) obtaining an ID/password for an appraiser or other person who is not employed with the company licensed by CoStar, and (3) using IDs/passwords outside of the facility for which the ID/password is licensed.

CoStar tracks each access, what information was accessed, and apparently the location from which each access is made.  Based on prior cases, CoStar is serious about alleged copyright violations and breaches of its license terms.  In 2010, it obtained a judgment against a commercial appraiser for $803,280.

In its latest round of lawsuits, CoStar also has filed a lawsuit naming only “John Doe” defendants involving the free property information database CompStak, which depends on “crowd-sourced” information and which has become a growing alternative in some markets to CoStar’s expensive service.  CoStar accuses the “John Does” of violating CoStar’s copyrights by contributing photos or other information obtained from CoStar to the CompStak database.  Costar has stated in a press release and in the lawsuit that it will seek disclosure of the identity of CompStak’s appraisers, brokers and other users who contributed such information and that it will then name those individuals in the case.

An interesting matter alleged by CoStar in its “John Doe” case is that it “seeds” some of the data in its system with purposefully erroneous information — presumably immaterial information.  It then uses that false data to gauge whether its information is being copied.  CoStar alleges in its lawsuit that it has found seeded data in CompStak’s database: 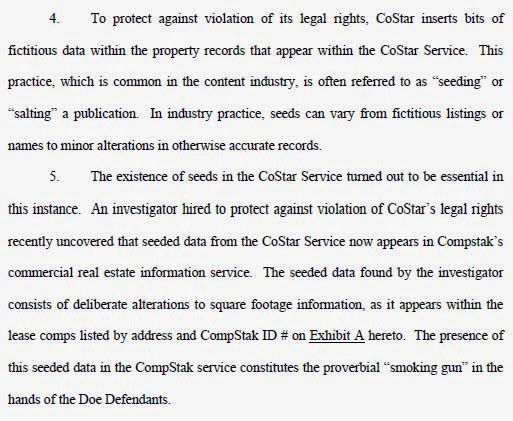 Here is part of the press release issued by CoStar:

WASHINGTON, DC – April 1, 2014 – CoStar Group, Inc. (NASDAQ: CSGP) this week is filing a series of lawsuits against 8 real estate firms and individuals as part of a coordinated anti-piracy campaign aimed at ending theft of CoStar services.
The suits allege systematic theft of CoStar’s services though acts of online piracy and computer hacking via illegal password sharing.  The defendants in these cases could be ordered to pay millions of dollars in damages.
CoStar is also filing a “John Doe” lawsuit in New York federal court based on allegations of improper use of CoStar data and photos to populate a competing service called CompStak.  To move the case forward against named defendants rather than John Does, CoStar seeks to compel CompStak’s disclosure of the identities of its users that have allegedly violated CoStar’s copyrights.
. . .
CoStar has a strong history of successfully securing judgments against data thieves. In 2012, the United States District Court for the District of Maryland finalized a judgment ordering Alliance Valuation Group, TGC Realty Counselors and Pathfinder Mortgage Corporation to pay CoStar more than $3 million in damages for their roles in unauthorized photograph use.   The order brought to a close a lawsuit involving a multi-state, multi-defendant password sharing network that involved companies in Orange County, CA; Houston, TX; and Palm Beach Gardens, FL.
To help catch data thieves, CoStar also offers a substantial reward for reports of wrongdoing that result in successful claims.  Individuals who report suspected password sharing or unauthorized use of CoStar content could receive either $50,000 if CoStar chooses to file a court case, or 100% of any funds CoStar collects in a settlement or judgment after recouping its legal fees.

Allegedly “Loose Lips” Cause a Big Claim. A recent and relatively big appraiser liability claim involved a commercial appraiser’s alleged breach of confidentiality.  The damages paid to the plaintiff were significant.  According to the plaintiff’s complaint Read more…