Published by Peter Christensen on January 11, 2010 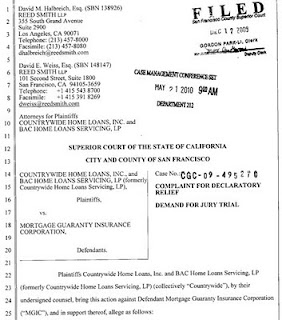 In November, Appraiser Law Blog reported about “rotten reviews” being used by mortgage insurance companies to deny mortgage insurance claims by lenders. The reason I wrote about the issue was that in some cases, mortgage insurers’ and other parties’ usage of rotten review appraisals is leading to unjustified claims against individual appraisers. It’s a nightmare — emotionally and professionally — for an appraiser to become embroiled in such a lawsuit, a nightmare made worse because it results from large companies treating appraisers as pawns.

I suspect that many of the reviews are being performed by out-of-state reviewers or by reviewers with less experience than the original appraiser. I also suspect that some of the companies providing the reviews know the mortgage insurers’ desired agenda and that the reviews suffer from that bias, as well as the bias of post-mortgage crisis hindsight.

According to the mortgage insurers’ own corporate reports, they are denying 20-30% of the claims they receive. However, I think that this percentage may, in fact, be understating the number of claims they deny to private lenders. The reason for this suspicion is that MGIC, in particular, has sold a majority of its insurance to cover loans sold to Fannie Mae — I think there’s a strong likelihood that paying those claims may be favored over others. Indeed, in MGIC’s most recent 10-Q SEC filing, it disclosed the possible jeopardy that the company would face if Fannie Mae decided to revoke MGIC’s designation as an eligible mortgage insurer which is already on shaky ground (sounds a bit like being “blacklisted” as an appraiser but on a bigger scale). The mortgage insurers attempt to explain their new claims denial tactic in their SEC filings by essentially stating that they just discovered mortgage underwriting was sloppy during the peak of the mortgage boom — if we are to believe them, these mortgage industry experts were the last to realize this fact. 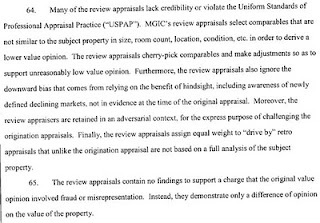 IC that it felt required to disclose the lawsuit as a material corporate event in a recent 8-K SEC filing, causing its stock price to plummet 10%. Some of the relevant allegations in the lawsuit are contained in the page displayed to the right. Bank of America’s subsidiaries allege point blank “the review appraisals lack credibility or violate the Uniform Standards of Appraisal Practice (‘USPAP’).”

There’s a strong chance that the suit may not go anywhere other than straight to arbitration because most insurance policies of this type contain mandatory arbitration clauses to avoid public litigation. Nevertheless, the lawsuit is good news for individual appraisers who don’t do review work for mortgage insurers because just the filing of a lawsuit like this further exposes the unfair practice and helps put a stop to it. It’s bad news, of course, for the few appraisers who perform this review work — they stand a good chance of being dragged into depositions or state disciplinary proceedings. Aside from that, one does wonder why any lender would ever again pay for mortgage insurance from one of these companies?

If this issue has affected you as an appraiser or as a lender, please contact me to discuss it confidentially.

What is the FDIC Suing Appraisers About? Some Examples of the FDIC’s Specific Allegations

The FDIC continues to sue residential appraisers in connection with origination appraisals and review appraisals performed for failed lenders between 2003-2009 on loans now in default.  It may be helpful, or scary, for appraisers and Read more…

An Early Report on Claims Against Appraisers in 2010

This is an early report about claims against appraisers in 2010. The good news is that the professional liability risk to appraisers remains manageable with prudent loss prevention, despite a large number of claims stemming Read more…