Published by Peter Christensen on May 6, 2012

Update on the update: May 19, 2012 – in the last week, the FDIC sued approximately 20 more appraisers as the receiver for BankUnited in a last-minute rush to file the actions before the deadline for its negligence claims relating to that failed bank.  The appraisers affected by these new lawsuits are in New York, Pennsylvania, New Jersey, Washington, California and Florida.  All of the appraisals were performed for mortgage brokers.

In 2011, the FDIC filed its highest number ever of lawsuits naming appraisers as defendants.  So far in 2012, the FDIC’s pace for suing appraisers has slowed, but that may change as the relevant statutes of limitations approach for several large lenders that failed in 2009.  (READI members can read about statutes of limitations and how they differ for the FDIC in “What Is The Statute of Limitations for a Lawsuit Against an Appraiser in My State?”)

Since January 1, 2007, the FDIC has sued or identified in court documents approximately 500 individual appraisers for allegedly negligent appraisals.  Of these, approximately 165 individual appraisers and appraisal firms have been named as defendants and the remainder identified as negligent by the FDIC in its lawsuits against other defendants, such as bank officers and directors and appraisal management companies.

In the last 5 years, the FDIC only has sued fee appraisers for one thing: over appraisal of subject properties.  Most typically, the FDIC has alleged that the appraiser’s opinion of value was inflated because the appraiser selected inappropriate comparable sales (to use the FDIC’s own words:  “more than one mile from the subject property”).  For examples of allegations in recent FDIC lawsuits see “What Is the FDIC Suing Appraisers About?”

A few appraisers have now been sued or identified as negligent in multiple actions by the FDIC — in other words, some have been sued twice for different appraisals, some have been identified as negligent for different appraisals in more than one lawsuit naming other defendants, and some are subject to both of those issues.  Though suing or identifying approximately 500 appraisers as allegedly negligent in its lawsuits, however, the FDIC has not, as a general rule, filed any complaints against appraisers with state appraiser regulators. Rather than pursue discipline, the FDIC almost uniformly only sues for monetary damages.  The average damage amount claimed by the FDIC in relation to an allegedly negligent appraisal exceeds $450,000.

The chart below shows the city and state of each appraiser sued or publicly identified by the FDIC as allegedly negligent since January 1, 2007.  In a few instances, I’ve changed the names of smaller cities/towns to more general descriptions.

Appraisers are beginning to find out that some lenders and appraisal management companies are now tracking the identity of appraisers sued or identified as negligent by the FDIC for the same reasons they track licensing sanctions when maintaining their appraiser panels.  The main reason for AMCs doing this is that an AMC has potential liability to a lender client for selecting an appraiser sued by the FDIC for negligence, in the same way that the AMC may have liability for selecting an appraiser with a disciplinary issue or insufficient license.

Finally, this might sound like a crazy question, but in the realm of the FDIC, it is not. . . “Wouldn’t an appraiser know if he or she actually has been named as a defendant in a lawsuit by the FDIC?”  The answer is “no”, because the FDIC filed a number of lawsuits against appraisers in 2011, never served the appraisers, and then dismissed the cases without prejudice to refiling. I can’t explain their tactics.  The lawsuits, however, will still show up in some types of credit or background checks. 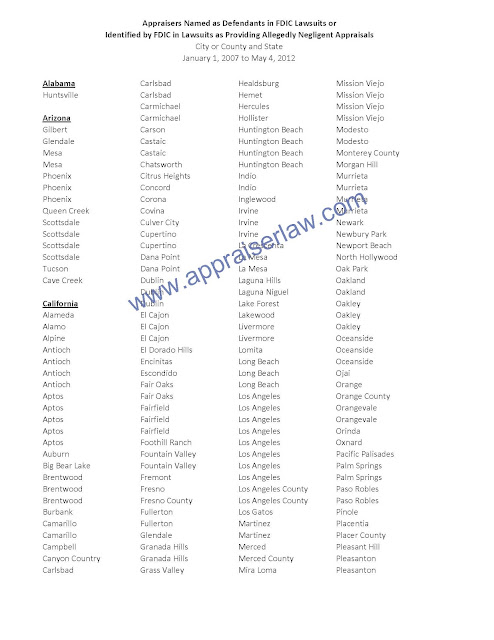 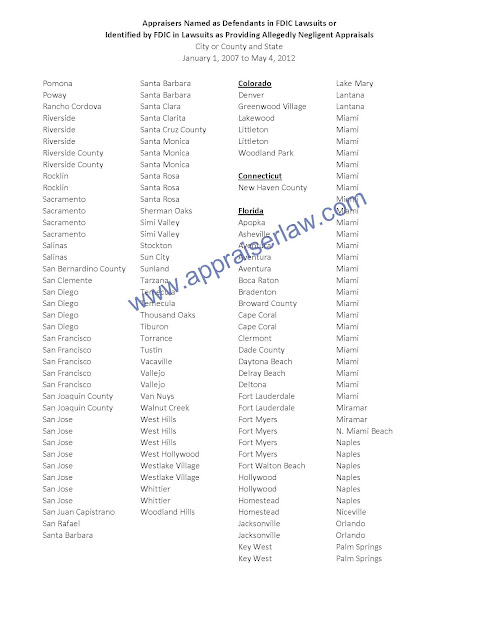 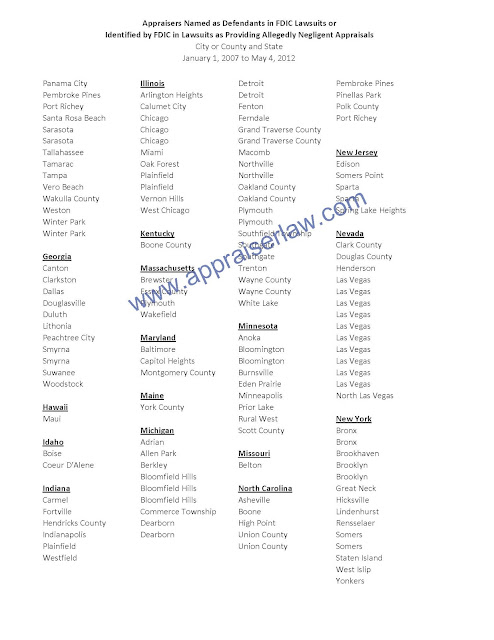 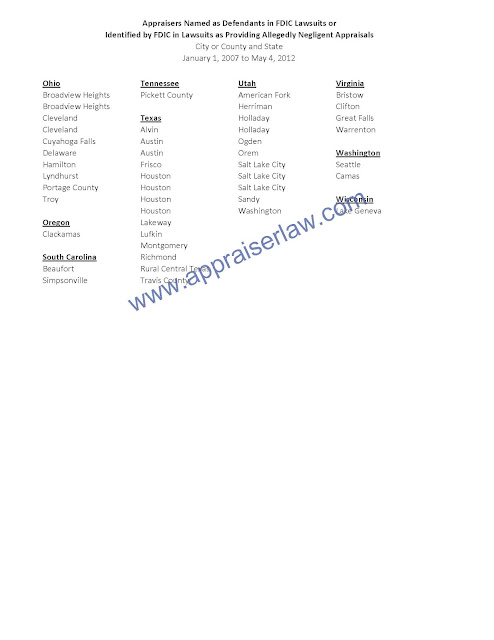